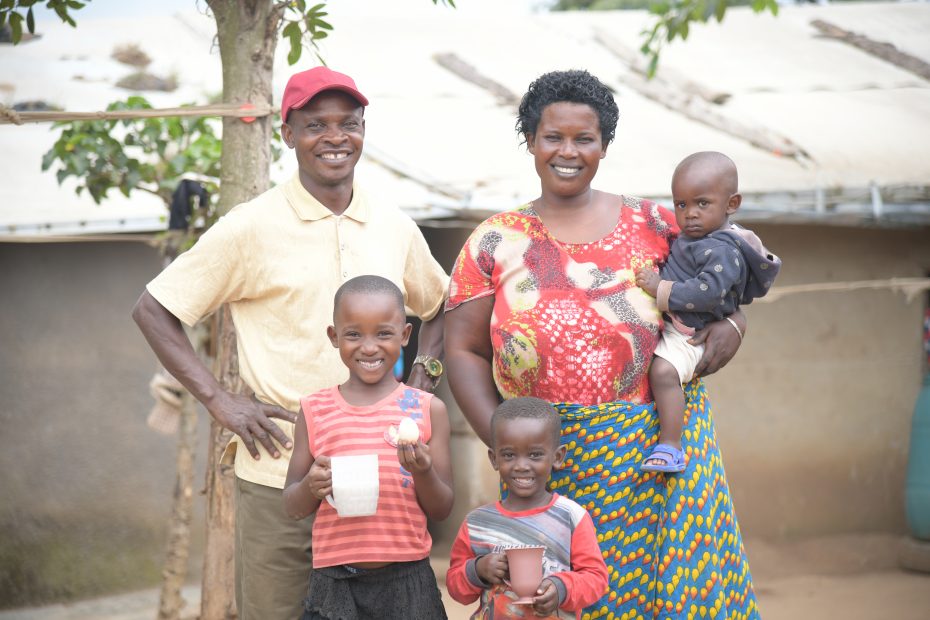 Charlotte Bahati, 36 years old, is scaling up her business. Thanks to the training received from AVSI Foundation, in a few months, she has gone from selling only silverfish to harvesting a more considerable amount of crops, and a new poultry farm. Charlotte can now raise a healthy family and is letting go of her past marred by huge losses after she fled her home country, the Democratic Republic of Congo.

While in DRC, Charlotte used to farm and sell groceries to earn an income to provide for her family. She grew maize and beans, kept some for consumption, and sold the surplus.

In 2016, she was granted refugee status. She received a quarter of an acre of land in Kaihora Village in Rwamwanja Refugee Settlement, Uganda, and she immediately began to plant maize and beans. She harvested a paltry two bags of maize and two basins of beans from her garden. She felt frustrated.

After two seasons of farming, Charlotte started a small business selling silverfish in a nearby market. She earned a profit of UGX 100,000 a month, but she has higher ambitions.

In 2018, Charlotte enrolled as a participant in the Graduating to Resilience Activity, a USAID-funded program that aims to graduate extremely poor refugee and vulnerable Ugandan households from conditions of food insecurity and fragile livelihoods to self-reliance and resilience.

Charlotte then met Jack Amani, a Graduating to Resilience coach who guided her to achieve her goals. A mother of seven, Charlotte received regular agronomy and livelihood training in her Upendo saving and Farmer-Field and Business group.

“I did not know how to use fertilizer; neither did I know the importance of spacing crops.”

In June 2019, the couple made a business plan to expand their silverfish business, which now generates UGX 200,000 monthly. A few months later, they used part of their profits to buy two boars, which gave them 17 piglets, which they later sold at a profit.

2020 began well for Charlotte and her husband, Aime. They started a poultry farm and have sold 100 chickens already. The skills they continue to receive from their Community-Based Trainer are paying off.

Charlotte takes her household’s nutrition as a priority and feeds her children with a balanced diet to ensure their good health and growth. Their chickens are laying eggs, which they also eat at home.

I was never interested in buying milk until I learned the benefits of good nutrition from my coach.

They now plan to buy a cow, from which they can get milk rather than buy daily. Every morning before selling fish, she makes food for her children as her husband takes care of the piggery and poultry project.

AVSI Foundation, in partnership with IMPAQ International and TrickleUp, is implementing the USAID-funded program by assigning 206 coaches and 89 Community-Based Trainers to 6,387 households in Kamwenge District, Western Uganda, to provide livelihoods training and reinforced messages.

The program targets 13,200 refugee and host community households to help them graduate from conditions of food insecurity and fragile livelihoods to self-reliance and resilience.