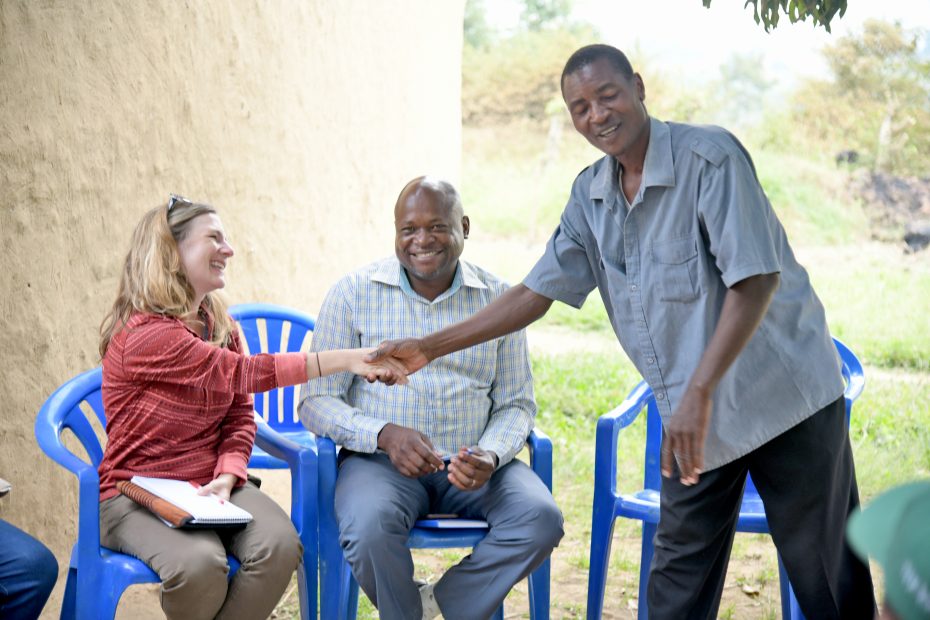 2020 may not have been the year we dreamed of, nor did we see it coming. But it will most certainly be one we will never forget. Everyone around the world had to re-adjust to a new way of life. Millions lost their livelihoods and shelter, struggling to make ends meet; millions lost their loved ones. We at AVSI have also lost one of our dear colleagues and friends. Graduating to Resilience’s Activity Team Lead, Mucunguzi Hannington passed away in December due to COVID-19 complications. We dedicate this newsletter in memory of Mucunguzi Hannington. May his soul rest in eternal peace.

In memory of Mucunguzi Hannington

Graduating to Resilience (the Activity) is a USAID Bureau for Humanitarian Assistance (BHA) funded Activity led by AVSI Foundation in partnership with Trickle Up and IMPAQ International, which seeks to test the Graduation Approach’s ability to graduate ultra-poor refugee and host community households in Western Uganda from conditions of food insecurity and fragile livelihoods to self-reliance and resilience. In response to the COVID-19 pandemic, the Government of Uganda (GoU) acted swiftly to halt the spread of the virus within its borders, mandating significant restrictions to movement on citizens and residents. The lockdown resulted in food price hikes, reduced income, and growing food insecurity.

On March 18th, 2020, the President of Uganda addressed the nation and announced 13 restrictions, including a ban on groups larger than ten people for thirty days. The Activity thus temporary suspended Village Savings and Loans Associations (VSLAs) and the group coaching component of the Activity to respond to these directives. Monitoring and Evaluation (M&E) training sessions were modified so that no more than ten people would be at a training location at one time. However, on March 25th, 2020, the United Nations High Commissioner for Refugees (UNHCR) informed AVSI that we could not implement any Activity components as only health projects could continue during the COVID-19 restrictions. As a result, AVSI complied and halted all field operations momentarily.

On March 31st, the country was on official lock down. Restrictions lasted for 65 days. On June 4th, 2020, the GOU slowly began re-opening Uganda by allowing public transport to operate with 50% capacity and expanded the number of shops that could open, providing they followed the Standard Operating Procedures (SOPs) provided by the government. During this time, AVSI conducted two context assessments to understand how the public health restrictions affected participants in the Activity and the markets in the area. The first round of data was collected in April and the second in June. Below are findings of participants’ experience after some restrictions were lifted.

99.7% of respondents in the host community and 99.0% of respondents in the refugee settlement reported washing their hands frequently for 20 seconds or more with soap and water. This information is consistent with qualitative data collected in June 2020, when participants stated that coaching lessons allowed HHs to be prepared with a handwashing station, thus easing the ability to implement regulations from the MOH. Additionally, 92.5% of host community respondents and 80.6% of refugee respondents stated they wore a mask when not at home.

Of the households (HHs) interviewed, 86.7% of host community HHs, and 89.2% of refugee HHs said they took steps to prepare for COVID-19 and potential lockdown. Actions taken by HHs interviewed included storing food; HH members that were away returned home; weeded gardens that were far away; and selling stocks at the business. The high number of HHs that took positive, proactive measures to prepare for COVID-19 restrictions indicates increased self-efficacy.

HHs who stored food for shorter periods decreased between the April and June data collection in both the host and refugee community. Those HHs who kept food for more extended periods – such as 15-30 days and greater than 30 days – increased in both communities. This aligns with the data that most HHs stored food as a coping strategy in the face of COVID-19 restrictions and the qualitative case studies where most HHs interviewed reported storing food. Besides storing food, qualitative data indicates HHs relied on kitchen gardens to supplement healthy meals as markets were either closed or difficult to reach.

Similar to food storage, there were positive trends in the amount of savings. In both participant communities, the amount of savings for shorter periods (no savings, enough savings for 2-6 days) decrease between the April and June data collection points, while savings for more extended periods (7-14 days, 15-30 days, and greater than 30 days) increase (Figure 1). Again, this shows HH’s ability to recover quickly from the public health restrictions’ initial shock and adapt to new contexts. HHs in the qualitative case studies reported continuing to save in their homes, using Mobile Money, saving their money with friends, and purchasing livestock. Notably, savings increased during this period as modified versions of the VSLAs re-started in late May-early June.

While most respondents said rates of GBV stayed the same, there are some concerning trends where rates of GBV have increased in both populations since the last data collection (Figure 2). This trend, particularly in the host community, was factored into coaching. Those who said GBV increased (24.8%) said this was the result of more time at home (75.6%), children not being in school, so parents are more stressed (54.3%), lack of money for basic needs (40.1%), increased alcohol consumption (19.3%), and increased HH chores (10.7%). Interestingly, among those who said GBV decreased (15.6%), many of the same reasons were provided as those who said there was increased violence. These reasons included: decreased alcohol consumption because bars are closed (70.2%), improved relations because of spending more time at home together (50%), children are at home, so parents are behaving well (25%), and increased collaboration in HH financial planning (34.7%).

Businesses were negatively affected by temporary closures of livestock and non-essential markets, which decreased the ability to sell goods and purchase inputs for business operations. These restrictions also resulted in reduced customers, partially due to transport restrictions, the fear of COVID-19, and reduced customer income. As such, 21.9% of host community and 38.5% of refugee respondents said they changed their primary business since the start of the COVID-19 restrictions. Most of those shifting businesses belonged to refugee HHs working in the off-farm industry and off-farm livestock who switched to on-farm crop, on-farm livestock or noted they did not have a primary business as well as host community respondents who appear to have switched to on-farm livestock to on-farm crop businesses (Figure 3).

HHs quickly switched from one primary business to another because of the high rates of economic diversification. It would not be easy for a host community participant to switch from an on-farm livestock enterprise to an on-farm crop enterprise mid-season. However, because HHs were already engaged in more than one economic activity, it was easier to absorb the shock when restrictions prevented certain businesses from operating.

“This HH has invested in a goat and various HH items. Since the start of COVID-19 restrictions, the participant now sells dried cassava and groundnuts. While she previously raised livestock for income, the closure of animal markets forced her to pivot her business.”