IN UGANDA, LANDMINES ARE STILL AN ONGOING PROBLEM

Most explosives found in rural areas date back to 2003 and deactivating them poses a challenge to local authorities. AVSI helps victims providing protheses and psychological support

Text and photos by Mattia Marzorati

Monica Piloya recalls every detail of the day a land mine changed her life.

“It was midday and I had just returned from the market. The rebels had attacked our village the night before. I walked away from the main road to allow a motorcyclist to pass and I stepped on a mine. In an instant, I was on the ground. These scars on my right hand were caused by the explosion and they had to amputate my leg. I tried to protect my son who was on my back but he died in hospital due to his injuries.”

In 2003, the Lord’s Resistance Army (LRA) led by Joseph Kony terrorized villages in Northern Uganda. LRA searched for children to recruit in their militias and young women to kidnap and rape as war trophies. Most of the mines and explosives that still reappear in rural areas can be traced back to those years.

“After three months in the hospital, my life became extremely difficult. I was a farmer, but without a leg, I could no longer work. I didn’t know how to deal with my disability. My husband left, leaving me alone,” remembers Piloya. 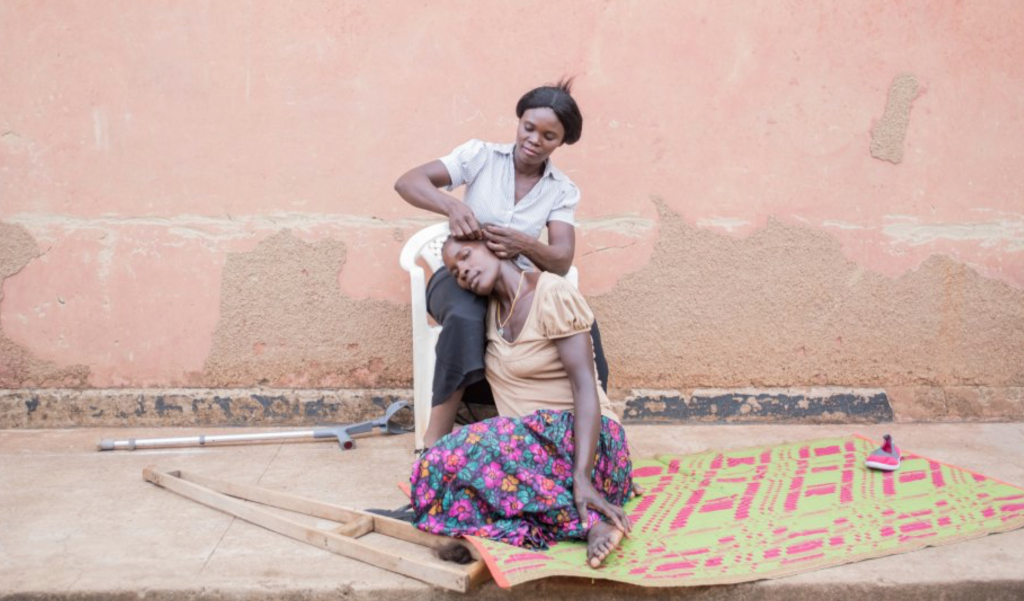 Monica felt less lonely when she found out about the project for the disabled coordinated by AVSI.

“In the clinic in Gulu, they offered psychological counseling and completely supported me. Thanks to the artificial leg they gave me, I regained my independence, could work, and be involved in the community. My husband took their advice and came back. Now we live together in the house he built for us. My life is back to normal,” she celebrates.

In Northern Uganda, there are thousands of stories like Monica’s, but unfortunately not all have a happy ending. Since 2008, the GROW (Gulu Regional Orthopedic Workshop) project run by AVSI supports war victims and has donated prostheses to more than 300 people every year. AVSI believes that during the 22 years of conflict, about 1,200 people were injured by the explosion of mines or other abandoned bombs, but it’s extremely difficult to have accurate and updated statistics. 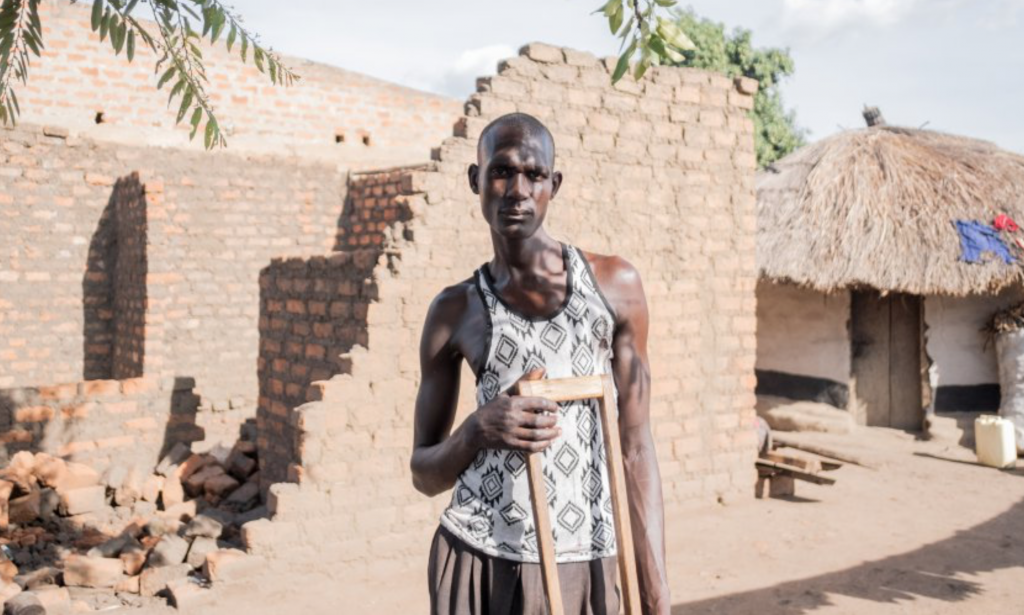 Steve Okello, director of the National Union for Disabled People (Nudipu), blames the Government for abandoning the survivors of mine incidents. He says that “To have updated data on how many injuries are caused by mines or how many bombs there are in Uganda is nearly impossible. The authorities don’t want to discuss this issue, much less get it resolved.”

He is disappointed that there isn’t an organization in charge of cleaning up areas of risk and that the police and the UPDF (the army unit specialized in the solution) intervenes only after a bomb has been found, often with months of delay. “As stated in 2012, Uganda certainly isn’t mine-free,” asserts Okello.

In 2012, Yoweri Museveni, the President of the Republic of Uganda signed the Ottawa Treaty and the country was officially added to the list of nations that declare themselves landmine-free. In reality, local authorities, whether in small communities or in big cities, agree that the number of untouched explosives in Uganda is unknown. Jimmy Patrick Okema, the Police Public Relations Officer for the district of Gulu, confirms that in the last 12 months there have been at least 145 new bombs identified, but only a few have been taken to a secure facility, away from the public. 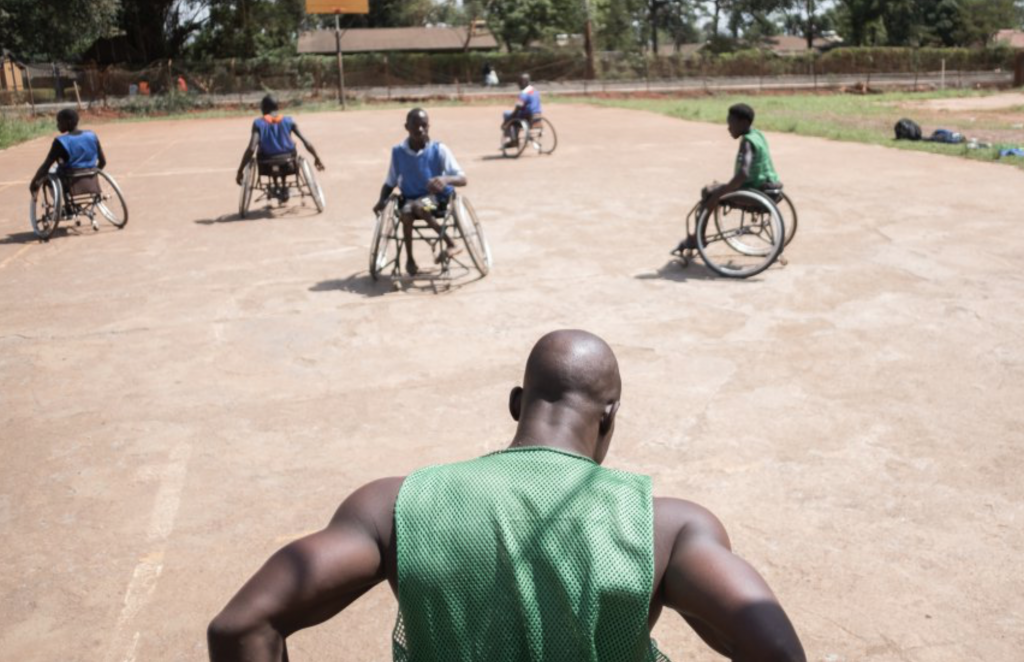 “It's hard to take effective actions. The mines are not concentrated in one area. They are dispersed throughout the northern part of the country, often hundreds of miles apart. This makes it impossible to find an adequate solution.”

The officer stresses that communication with local authorities in small villages needs to improve. “Often they don’t answer the phone and send us incomplete information about the exact location of the devices. Currently, Gulu is one of the areas most exposed to risks, but we also receive reports from Awak, Paicho, Awer, Ongako and Nwoya. Less than a year ago, a mine exploded in Nwoya, leaving one child dead and another injured,” tells Patrick.

In this context, AVSI’s partnership with Gulu Orthopedic Center remains very important, but international funds allocated to the project are in decline. Compared to when the civil war was ongoing, donations have greatly declined. This leads to serious limitations in the services provided, like offering free lodging to patients who are waiting for their prostheses to be ready, which can take several weeks. In the laboratory, a team of specialists deals with every step of the process, from the plaster of the amputated limb to the calibration. This is a very delicate phase. If there is an error, even the smallest in the alignment or longitude of the prosthetic, it can result in physical impairment in the client’s future. To accurately construct the prosthetic, many attempts and hours of physical therapy are necessary to observe the adjustment of the body’s movement. 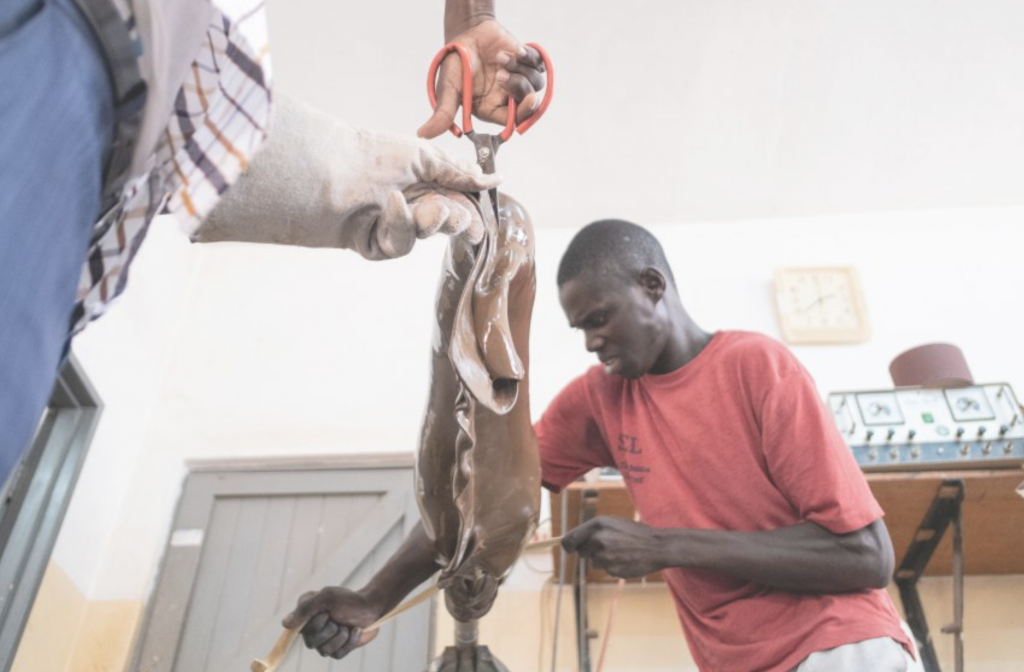 Joyce Laker, who has been running the project for several years, witnessed firsthand the changes that occurred over the years: “The economic aspect, unfortunately, is a major setback. At first, thanks to the support of the Trust Fund for Victims, we were able to provide food and accommodation to patients in our clinic, but now we can no longer do so. Often, people focus more on the money than on the great work we do”, notes Laker, choosing psychological support as the clearest example. “Many do not understand how psychological support is important, but we know that it is an integral part of the support to victims of war and to those who have had mine accidents. Without us, many patients would fall into depression or think of suicide”, says Laker, adding that some progress has been made in reducing the stigma of disability.

The Gulu Orthopedic is a reference center in Uganda and South Sudan, but many cannot afford to be away from family and work, so they have to let go of the dream of having an independent life.

This is the case for 28-year-old Richard, who stepped on a mine while hunting in 2016. After becoming an orphan (his father died of Ebola and his mother was assassinated by the LRA), Richard had to take care of himself and of his little brothers despite a severe disability. Nudipu helped Richard complete a course that taught him how to be a motorcycle mechanic, a job that made it possible for his family to survive, but not to save for any treatment.

“AVSI’s project has done a lot in the past and the project is still essential for people living in these areas, but the authorities also need to be involved to avoid further deaths and injuries", says the director of Nudipu. “Personally, I feel obliged to do much more; in 2002 they amputated my leg when I was still a student, but I consider myself lucky because I realized that this problem should not be a constraint. I lost a leg, but I’m here, I’m alive.”

LEARN MORE ABOUT AVSI IN UGANDA