IN THE FIRST YEAR OF A PRM-FUNDED PROJECT TO SUPPORT INTERNALLY DISPLACED PERSONS, AVSI REBUILT 83 FARMS AND OFFERED VOCATIONAL TRAINING TO 50 WOMEN AMONG OTHER ACTIVITIES THAT ARE CONTRIBUTING TO THE ECONOMIC RECOVERY OF THE CITY OF QARAQOSH

“The chicks came to our farm when they were newborn, and we fed them following the advice of the vets who work with us,” remembers Atheer. “For the first five days, we used different vaccines. Then we gave them specific food for each stage of growth.”

Atheer’s is one of the 83 farms that were rebuilt during the first year of the project, surpassing the targets set for the year. In 2020, AVSI will provide training in agriculture and food security to these farmers and will rebuild 20 more facilities. In addition to semi-intensive chicken farms, the project finances smaller farms and wants to encourage local dairy farms like the one owned by Amal Said and her husband. 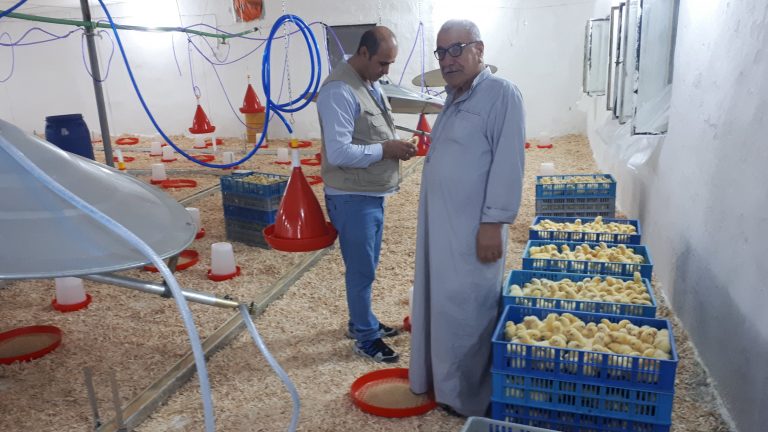 “We make cheese from the goat’s milk. It’s a simple process,” says Amal with a big smile on her face. “We produce about 20 kilos of cheese every day, and it’s delicious.”

In 2014, the Islamic State took the city of Qaraqosh and forced the local population to leave their houses. They used the city as a stronghold of Mosul, stealing and burning the houses. Most of the 250 farms were destroyed.

“Before the war, between 20% and 25% of the wheat produced in Iraq would come from the Nineveh Plains, near Qaraqosh,” explains Daniele Mazzone, AVSI Iraq Deputy Country Director. “Qaraqosh was also considered the largest chicken market in Iraq.”

Now, the Qaraqosh population, mostly Christians, is back home and the work to rebuild the city is visible everywhere. There are already 20,000 people living in the city.

“This area has been known for its agriculture products, but sadly because of what happened in 2014, the agricultural sector was badly damaged. PRM believes that the recovery and establishment of this sector is vital for the community,” says Dilshad Ububakir, Refugee and IDP Affair Assistant US Consulate in Erbil, Iraq. “We hope that with AVSI and other partners, we can play a big role in establishing livelihoods for the people in this area.”

AVSI has also offered vocational training to 50 women, all members of the Women’s Production Association of Qaraqosh (WPAQ). Their headquarters was renovated and it is now a place where the women can produce yogurt and cheese.

“It was a beautiful experience,” says Mona Samir. “We learned how to do things properly.”

Back to his farm, Emad Aziz is also having a beautiful experience:

“I love this land so much, how could I not?” asks the farmer. “It’s the result of my efforts, and it’s giving me a lot.”

LEARN MORE ABOUT THE PROJECT