Funded by UNICEF and launched in 2019, the project “Supporting Vulnerable Girls and Boys to Access and Remain in Education in Lebanon” gives children access to education and guarantees their right to literacy

There are currently about 488,000 school-aged Syrian refugee children in Lebanon and more than half of them are still our of school (Source UNHCR – Data 2017/18).

To address the growing need, AVSI is helping more than 11,000 children between 3 and 14 through the project “Supporting vulnerable girls and boys to access and remain in education in Lebanon”

Syrian refugee currently living in Tripoli, Lebanon, with his parents and three brothers, six-year-old Khaled is among these children. Although he was born in Lebanon, his family tried to go back to Syria when he was 1 and a half.

“It was 2015 and we were hoping that the situation back home had become better,” remembers Shadia, Khaled’s mother. “We stayed one year in Syria but it was a nightmare. We had to endure many sleepless nights due to the sound of bombs and bullets, and it was too dangerous to stay. We came back to Lebanon, but unfortunately the war had left devastating effects on the family especially on our youngest child Khaled.” 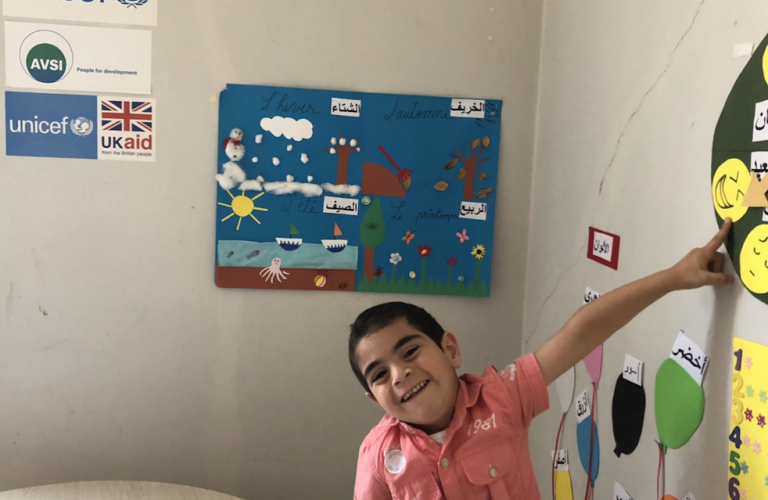 Back in Lebanon, Khaled had no chance to attend school, but he was involved in the educational activities in one of AVSI’s centers. When Khaled enrolled in the first educational cycle, the teacher described him as very shy. He could barely say a few words, and couldn’t concentrate in class. Staying with his classmates, and learning how to write and count allowed him to express himself better, talk more eloquently and be more responsible and confident.

"When AVSI’s centers are open, he gets very excited because he enjoys spending time with his teacher and friends. He loves to go to the center and it's amazing how studying became the way he can deal with his fears and weaknesses. I just want Khaled to be happy, I want him to have a healthy childhood."

The project, funded by UK-aid, Australian Aid, the Governments of Canada and France via UNICEF, allows many children to benefit from an Early Childhood Education program, and gives them the chance to learn the basic skills they need to bloom in school while playing and enjoying their time.